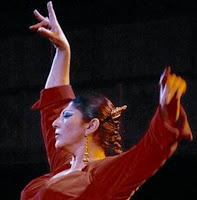 Yesterday I joined a few of my flamenco class friends to go to see dancer Manuela Carrasco's show at Sadler's Wells, as part of ther annual Flamenco Festival.

A few things about her show, Suspiro Flamenco, left me perplexed (mainly the almost random lighting) and I would have liked to see a little bit more of both her and her fantastic male dancers. But overall, it was a good evening of very pure flamenco.

My highlight was simply to see Manuela Carrasco dance. She is a true veteran who has been performing on world stages since the 1970s and the real flamenco deal (if I can say that?!). She comes from Triana, a neighbourhood of Seville famous for its flamenco tradition - a type of songs is even named after it, the 'tangos de triana' ('Triana, Triana, how nice is Triana' goes a popular one). She didn't take flamenco lessons - she just learnt it from being surrounded by it throughout her childhood.

Plenty of great descriptions have been attached to her, from 'rough diamond' to 'a reincarnation of old gypsy women', even 'the goddess of flamenco'. She is a powerful performer, that is for sure.

I loved her style - it is very gypsy. The arms are kept simple, there are few flourishes, and her upper body stays very straight. I can still see her, back to the audiences, arms up, with only her hands are moving in slow motion, nothing else. See the video below, from 2min08: the arms suddenly just cross as if in embrace, before going down, and then slowly she brings them up as she walks forward. They don't go all the way up, and then back down in various flourishes: they just stay there, strongly, until, right at the end of the musical line, her hands move a little bit, but her arms stay were they are.


Again, simplicity was all that was needed to move the audience. As the cantaor Enrique El Extremeño finished a song with beautiful cries, all she did was turn and face him, one arm up in the air, waiting. It seemed like defiance at first, but in the end it was a surrender to the music - 'here I am, let me feel your music' it seemed like she was telling him, 'your singing is so beautiful'. Her arm then slowly came down, closing in on herself. For me, the message was that the duende is so powerful there is nothing else to do but to feel it and let it go through you.

Carrasco shared the stage with three incredible male dancers. Oscar de los Reyes and Choro did fireworks with their feet, with some incredibly intricate footwork, that seemed unending and drew well deserved cheers from the audience, to a rousing tangos rhythm. The other male dancer, Rafael del Carmen, performed a nice alegría, like Carrasco he has a simple style, quite rough in the arms, but fantastic footwork, and had some good fun in the bulería.

The ending of the show, also, was simple. Carrasco performed a solea with the singer standing by her side at the front of the stage. It is a rhythm that suits her, requiring simple but sharp movements and long passages of footwork full of counter-rhythms that showed off her extraordinarily clean technique (this is what she dances in the video above). At the end, as the cantaor sang 'Arcame Dios' (Rock me, God), she put her arm around his shoulders and they simply walked together, before she turned to embrace him, her face resting on his chest. Very moving!

(I must point out that I *think* the words were 'Arcame Dios'. It is often hard to understand what cantaors sing, so it may have been something else. But it certainly sounded like a plea to god. I must also say that the ending seemed a bit abrupt, we all expected another dance. The Evening Standard review says the show ended early.)

Another good thing about that final dance is that we are learning a solea in our class at the moment. Carrasco performed some footwork we knew - which pleased us no end - and really embodied the spirit of that dance. We can only hope to emulate a tenth of that one day.
Posted by Unknown at 2:36 pm