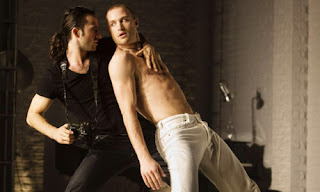 The Times Breakthrough Award went to dancer Aaron Sillis, who played Basil Hallward in Matthew Bourne's Dorian Gray. It is great news that an award voted for by the general public went to a dancer. Bits about him in today's Times: "Born in Norwich, Sillis got his break when he was spotted in a local panto at the age of 12. He trained at Bird College of Musical Theatre, in London, and has since worked with Take That, Mariah Carey and Leona Lewis. He has choreographed Kylie, stalked the catwalk for Versace and played a schoolboy in Harry Potter and the Goblet of Fire."
Congratulations to them.
Posted by Unknown at 10:21 am No comments: