Video - Public Domain Review: Strange Contests in the Netherlands
Public Domain Review explores all the films, images, texts and more that are free of copyright. It's full of weird stuff. In this post, they look at videos of contests such as a 1933 ostrich race, and the use of typewriters to make art in 1937 (the precusor of those images created from signs like ( 3 ^ and the like on Twitter.

Article - New York Times: Debunking the Myth of the Job-Stealing Immigrant
I am an immigrant myself to the UK, after all. A simple point: "Logically, if immigrants were “stealing” jobs, so would every young person leaving school and entering the job market; countries should become poorer as they get larger. In reality, of course, the opposite happens."

Breakin' - ten things I love about the 1984 breakdance film

A few weeks ago, I wrote about cheesy dance films I had to see this year. The first one I got to enjoy was Breakin', the story of female jazz dancer  (Kelly) who discovers the street dance of Venice Beach. Here are some of my favourite bits (all the dance sections are a great watch, so make sure you catch the entire movie one day!)


1. This top. Adolfo 'Shaba-doo' Quinones has amazing style. If only I could rock a jumpsuit like he does!

2. This signature look, worn by Kelly's friend Adam, who takes jazz class with her and is friend with streetdancers Ozone and Turbo. One word: tight. (credit to @ParisLDN, who came to see the film with me, for the joke). In a later scene, Adam pays Kelly a visit in the diner she works for, and wears really tight bright blue trousers. From this, the audience can easily work out that Adam tucks it to his left. 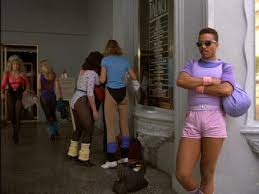 3. Ice T being credited as 'Rap talker' in the end credits. I guess the term rapper didn't exist at the time?
Read more »
Posted by Unknown at 4:38 pm No comments:

How would you imagine a #dancingmuseum?

French choreographer Boris Charmatz is taking over the spaces of Tate Modern on 15-16 May, with the goal of turning it into a musee de la danse, a museum of dance. I am so there to watch it happen.

I still remember the first time I heard Mr Charmatz speak. It was at a poorly-attended event at Southbank Centre, where a number of artists had been brought together to present ideas, works in progress and the like. He just stood up and started talking, leading us to imagine what a musee de la danse would look like if there was one right here at the Queen Elizabeth Hall. "I was looking at the skaters underneath here, and thought that they would fit in well within a musee de la danse. I would put people in that green space you can look down on from the foyer too..."

He went on with more ideas like that. He was refreshing. His French accent was charming. Now it's kind of happening, in a re-hash of his takeover of MoMA in New York in 2013.

In some marketing copy, the Tate asked "how would you imagine a #dancingmuseum?". Well here is a first list of what I'd like to find in that kind of museum...

Interesting, intriguing, exciting, amusing, enraging, fascinating things I recommend.
Article: This is what it's like to go to jail for trolling (Buzzfeed)

It's not all silly pointless lists over on Buzzfeed... a sobering (!) report on two Twitter trolls who were sentenced to 8 and 12 weeks in jail for online threats.
“I thought in my head actually, that when someone sees something like that and they read it, they’re gonna complain … But you think, ‘This is Twitter’ – you don’t expect to be raided by nine police officers.”

Music: San Fermin
Their song Sonsick made it into my list of 13 tracks of 2013, and it was probably the most played track on my Spotify in 2014. I just could not get enough of it. Their gig at the Village Underground was perfect - hot singers (sorry, can't help it!), awesome brass section, the album played in order with a sprinkle of new tracks. They are back in London in April at the Jazz Cafe: I have my ticket already.
Read more »
Posted by Unknown at 4:48 pm No comments:

Essay - The New Enquiry: Permanent Records (by Molly Knefel)
Kids are uploading their adolescence in real-time, and the Internet refuses to forget. Will it change the way we live as adults?