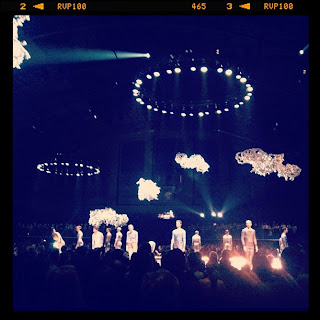 As per the wishes of its late founder, the mighty Merce Cunningham, his dance company closed shop two years after his death. Its final performance was in New York City, at Park Avenue Armory.

No need to say it was a piece of dance history and I would have loved to have been there.  I bagged a last minute ticket to the final London performance, and the audience's reaction was thunderous. I can't imagine what it must have been like in the company's home town - the LA Times reports a 10-minute ovation.

While in London we were treated to three different programmes, these performances 'included portions of 24 Cunningham dances representing five decades. From various vantage points — including six elevated platforms that offered a panoramic perspective on all three stages — one could marvel at dances ranging from the wildly feral to the privately meditative' says Susan Reiter in the same LA Times review. Which sounds pretty fantastic. https://twitter.com/#!/lawsonwhite/status/153262862381494273/photo/1 shows the view from one of the balconies onto one of the stages, with people standing around.

So I wasn't there, but luckily there is always Twitter to see people's reactions! Here is a round-up of tweets, including some pics of the final bows.


Final final curtain call for #merce cunningham dance co@ParkAveArmory. So moved to be here. Thanks. #fblockerz.com/s/170425833

The end of an era with the final performance of the MerceCunningham Company NYE NYC 2021 pic.twitter.com/ikznorrQ


Thank you for an unforgettable performance and goodnight, MerceCunningham company.

Yes it must have felt a bit unreal to see this, 'an extraordinary artistic act of self-immolation' (New York Review of Books) but the legacy will leave on, let's hope!

WNYC radio has some audio coverage of Cunningham's career on its website: Saying Goodbye to the Merce Cunningham Dance Company.

This blog has been left dormant for too long.

Working for a big dance venue, I felt that I could not really write reviews about the shows presented there, and Twitter worked better to share videos or articles I enjoyed, so there wasn't much to mention on here.

But I am hoping to write more in 2012, mainly because I will be taking beginner's contemporary dance classes, which I am very excited about and think it will make for some good posts! I will also try to blog more about flamenco, which I have been dancing for five years.

Happy new year everyone!
Posted by Unknown at 11:04 am No comments: