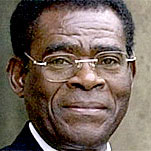 Great! Teodoro Obiang, the president of Equatorial Guinea, was supposed to visit the Spanish Parliament this morning, but it was all cancelled

The official reason is timetable organisation apparently, not the opposition of the MPs of PNV (Nationalist Basque party), IU (Izquierda Unida, left) and ERC (Republican Catalan party) to the visit. Of course!

Why such opposition? Simple. Equatorial Guinea has the second highest income in the world at about £ 26 000 per head, thanks to oil revenues from its Zafaro oil field. But it also comes bottom in the United Nations' Human Development Index, which measures quality of life says the Guardian

Teodoro Obiang has $ 700 million in foreign bank acounts, and was recently re-elected with 97% of the votes. According to a 1999 report by the International Monetary Fund, oil companies received “by far the most generous tax and profit-sharing provisions in the region.” The state received only 15 to 40 percent of the revenues from its oil fields, while the norm in sub-Saharan Africa was 45 to 90 percent.

Glad to see a Parliament care about human rights for once!

More can be read on the corruption in Equatorial Guinea in this Mother Jones article
Posted by Unknown at 1:44 pm No comments: