As mentioned earlier on this blog, choreographer Rafael Bonachela picked 6 choreographers he liked and invited them to perform at Southbank Centre. It was free so I went to check it out.

Due to the snow and stuff, I only made it on the Saturday (3 other choreographers were performing on the Sunday) but still it was pretty good. A few pics below. 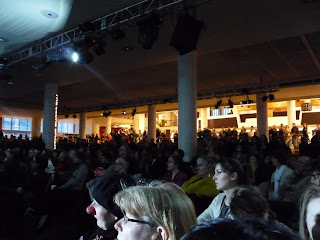 Quite a lot of people turned up, which is cool! Go dance! 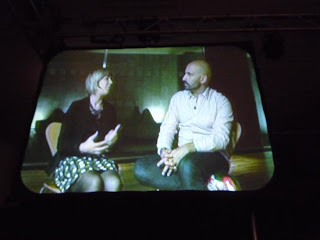 Rafael Bonachela wasn't there himself but did record something on video.

Adam Linder. Yes, he wanked off a gun - the 10-year-old girl next to me looked a bit horrified. His solo, set to Ravel's bolero, was interesting, but maybe with an undertone that was too violent or sexual for an afternoon audience (even a contemporary dance one). The hilarious thing was this middle-aged man who went at the front of the stage and started putting his legs up in the air and do weird things - we all thought he was part of the piece, but realised he wasn't when security came to take him out.
Credits to Adam Linder for carrying on with his performance though. 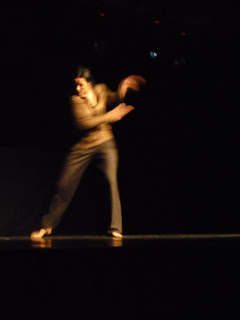 I can't really remember anything Blanca Arrieta did (sorry!), but I am quite happy with this picture.

If you went on the Sunday, feel free to let us know what it was like!
Posted by Unknown at 8:28 pm No comments: