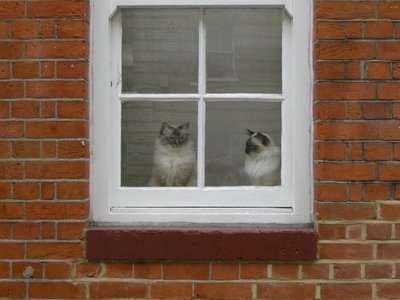 Drury Lane, London, September 06
Special pic for Vanini!
Posted by Unknown at 8:06 am No comments:

Silvio Rodriguez at the Barbican - review

Silvio Rodriguez was at the Barbican yesterday evening, for a very special concert.

Silvio Rodriguez is "the Beatles and Dylan rolled into one" for Spanish speaking people said the Guardian a few days earlier. And indeed the expectation among the crowd was as high as if a concert with such a line up ever happened. Since his music career started, 45 years ago, Silvio had only been to London once before. So imagine the queue awaiting return tickets in the Barbican Hall.

I will be quick on the supporting band, Ska Cubano, who did their best to warm up the crowd, but putting them before Silvio Rodriguez would be like putting the Pussycat Dolls before Joan Baez. We're expecting a man with a few guitars, a flute, nice melodies and exceptional lyrics, so not really in the mood for some dancing. But they did quite well, until members of the 80s band Madness joined them onstage. Then, Ska became what I really think it is: boring.

Anyway, after the entracte, Silvio came on. Already we were on our feet to welcome him (So much for having to win people over!)

I thought about how tough it must be to be Silvio Rodriguez. He has 5-10 tunes that are known almost by heart in Latin America. Everyone probably remembers where they were the first time they heard Ojala. A boyfriend had just dumped me, and there came this haunting guitar and these lines over a tape player: "Let's hope something will happen that erases you suddenly, a bliding light, a snow storm, Let's hope at least death will take me so that I dont see you that much, so that I dont always see you". I cried like an idiot in front of everyone.

Anyway, it must be hard for him because people want to hear those songs, he has to play them. New ones? OK, why not, but you have to play Ojala he?? Which is why we knew there would be several encores because he hadnt played Ojala or others. And, when a guy comes twice in London in 45 years, we want to suck the blood out of him, he'd better play all the songs he can!!

So it was a good evening. I realised there were many songs I didnt know, but I enjoyed the warmness of people around me, people clapping to specific lines in songs, people doing a proper encore clapping (ie not random, but "O-TRA, O-TRA, O-TRA" English people cant do that, believe it or not), and of course Silvio's songs. He is a good writer, and though he has little efforts to make to be liked, he is a good performer as well.

To finish, here is a poem by Luis Rogelio Nogueras he read to people during his performance (he seems to read it at every concert)


My translation (The ... sign means I didnt know how to translate. Apologies)


I follow the way taken by 4 millions spectres (...)
It is Auschwitz, the horror factory that human madness built to the glory of death
It is Auschwitz, a mark on the face of our times
And, in front of the deserted buidlings, the electric fences (...)
In front of the rusty oven door where were incinerated fathers of other sons, friends of unkown friends, wives, brothers, children who, in the last moment, aged millions of years.

I think about you and cannot manage to understand how you forgot so quickly the vapor of hell.

I watched with interest the Channel 5 programme Don't get me started, where a well-known figure talks about an issue they feel strongly about. This week, it was the philosopher Ted Honderich (Profesor Ted Honderich for the intimates), who talked about the war on terror bla bla bla.

His point was that we had to address the causes of terror, not just terror itself, and the cause is rooted in the Israeli- Palestinian conflict. Who would have thought? Thanks for that, Ted, we had figured that out before.

As a reminder, Israel was created in 1948 by the Western powers, in some sort of compensation to the Jewish people, victim of the Holocaust, on a land called Palestine. ie a land where people already lived, but we didnt really think about that. So we can imagine the anger of the Palestinian people, having their land taken away, and realising that their fellow Muslims were powerless to regain that land for them. Today, Palestinians still suffer from Israeli domination (checkpoints, the wall etc...) and that can be said to fuel extremism and terrorism among Muslims (the same way Nazi brutal occupation of France fueled the ranks of the Resistance during WWII)

Anyway, 2 interesting points in the programme:

Ha, how I like programmes with interesting and challenging messages nicely presented and argumented, where the trail of thoughts is easily identifiable and things make sense. Well done. Tap on the back Ben, for feeling clever tonight.
Posted by Unknown at 8:17 am No comments: 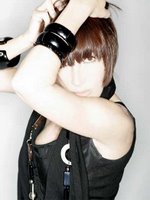 Ana Torroja, lead singer of the major Spanish band of the 80s, Mecano, did a tour of 42 dates around Spain this summer to celebrate the 25th birthday of the band (no longer together) and to promote her album, Me cuesta tanto olvidarte, which includes 13 new versions of Mecano classics.

Apparently, the tour was quite a success. The last date, yesterday in Madrid, got a good review in El Pais this morning.

Dalai Lama, Hijo de la Luna, El 7 de septiembre, Mujer contra mujer... Mecano made it big in France as well, thanks to well translated lyrics and what a voice has la Torroja! I remember learning Un ano mas in my Spanish class when I was 13, and everyone asked the teacher to copy the song on a tape for us.

Tonight we are celebrating my sister's 35th birthday and 10th wedding anniversary. I am pretty sure Dalai Lama will be played at some point!!
Posted by Unknown at 1:47 pm No comments: 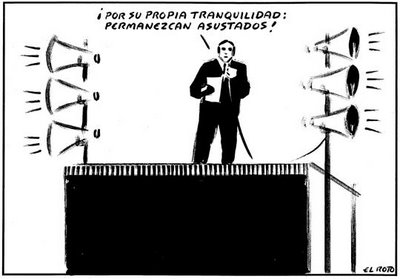 For your own tranquility, remain scared!

Feeling a bit shit today.
Woke up at 5.30am with a sore throat (angine), and am paying the consequences of my stupid Monday idea: going to the gym in the morning and going to my flamenco class in the evening. My legs are dead. It was fun at the time though!

I have been obsessed by this poem, written by gallegan writer Rosalia de Castro in the 19th century. It is read in the movie El espiritu de la colmena.

Sunday in the park 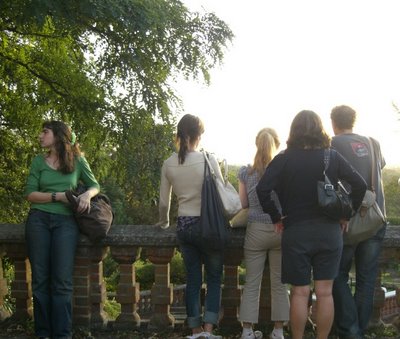 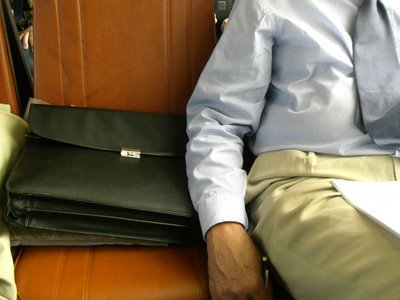 Yesterday we inaugurated our Eurovision update! (love it)
Today, we shall aim a bit higher and I will start a (hopefully weekly) series of pics of clouds, taken by myself (and others if you wish, feel free to mail)
This one was taken last sunday, in Paris 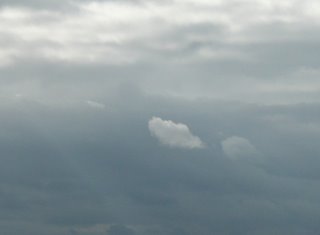 Posted by Unknown at 9:15 am No comments: 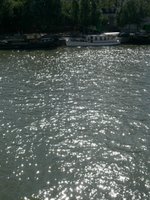 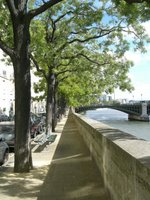 I shall end here with my trip in France.
As Michael said "Paris doesnt disappoint" 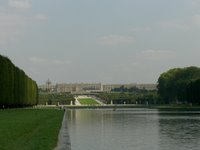 Versailles certainly didnt. At 25, it was time for me to visit it after hearing so much about it as a kid in our history lessons!
A huge and almost perfect place. So much details was put in everything! Just amazing. (Sorry it is late and it would take too long to describe everything!) 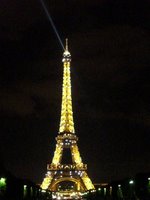 We have been pretty unlucky with Parisian Nightlife. On Saturday, we queued for a while but did not manage to get into the "River's King" boat, for the Supa Fresh night. Had we arrived 5 minutes before, we would have probably gone in. Obviously, a night with open bar until midnight, on a boat, taking you on a cruise on the Seine, and 2 dancefloors, was always gonna be popular. Yesterday, we looked for but never found the Mix Club, by the Tour Montparnasse. The guide said it was a huge venue, and held a popular gay night on Sundays. It turned out that we didnt look properly, and that this gay night was only once a month, so, had we found it, it wouldnt have been much fun in there! 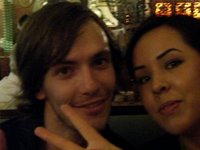 Still, I managed to meet up with my friend Viviane. Hadnt see her for 3 years, but she said "It feels like I last so you yesterday!"
Posted by Unknown at 9:15 am No comments: 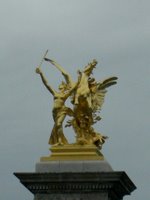 Michael and I are in Paris, France (cher pays de mon enfance) until Tuesday, eating like pigs and meeting friends, chilling out and trying not to think how much more beautiful it is than London.

So far, we have ran into many people who seemed crazy (they talked rather agressively to random people) as well as a busker on the tube who had "un petit programme musical pour vous les voyageurs" and started shaking his body to african tunes. A woman went on for more than half an hour on "ces salauds de Bordelais". We had diner at 1 in the morning in a brasserie. We have also been to the Musee de l'Orangerie in the Jardin des Tuileries to admire Monet's Nympheas. It has a strangely relaxing and soothing effect on you, something intended by Monet. He was the first living artist to give a painting away to a nation. He travelled around, was a major Impressionist figure, went almost blind... I am quite keen on reading his biography now. 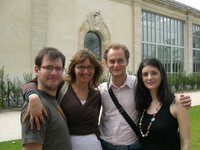 My twin Romain, his gf Nathalie, Michael and our cousin Julia, outside L'Orangerie
Posted by Unknown at 5:41 pm No comments: