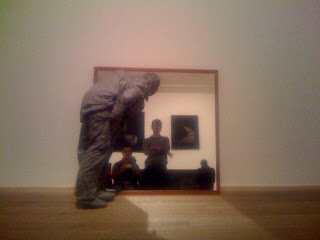 Nicolas and me, looking at a Juan Munoz piece (obviously I can't remember the name of it. It's a self 'portrait' though, this much I remember)
Went to the Juan Munoz exhibition at the Tate Modern and found it brilliant. I liked his balconies, the way viewers have to get quite involved to see everything there is to see in his sculptures, which were quite poetic, despite the highly disturbing factor sometimes! The other good thing is that there weren't too many kids around. There were hips in the members' bar though, which is pretty annoying, though I guess people with young children should have the right to a bit of culture too.

However, there was a little girl yesterday in the audience at the Royal Opera House, watching 3 short works, 1 a modern piece by McGregor, the other the Rite of Spring (sacrifice the maiden!) and another about a soldier who murders his girlfriend. Not exactly the Nutcracker is it?
Posted by Unknown at 3:18 pm No comments: