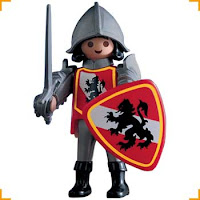 A very interesting article in The Economist on Europe's biggest toy brands, Lego (Denmark) and Playmobil (Germany). I tried to explain to an English friend what Playmobils were and failed.

"Study these little people, and you learn much about European views of globalisation, violence, creativity, America, race, gender equality and what makes a good job. For example, says Playmobil's chief executive, Andrea Schauer, “the dream of every German mother” used to be to have an engineer for a son. Parents liked to see boys assembling elaborate structures in their bedrooms; Lego is the top toy brand in Germany. In contrast, the French shun construction toys, preferring the world of the imagination. Playmobil is their leading toy brand.

Europeans are squeamish about warfare and armies. American shelves groan under tanks and muscle-bound action heroes; European parents are less keen. Playmobil tanks and warplanes “could certainly make big money,” says Mrs Schauer, since children write in demanding such things. But Playmobil will not make them. Europe's history, especially Germany's, rules it out.

Yet go farther back in history and violence triggers little concern. There are Playmobil knights and barbarians, pirates and Roman legionaries, all wielding lethal weapons. Europeans can even live with American military toys, if they are old enough: there are Playmobil cowboys from the Wild West, and soldiers from both sides in the American civil war.

The difference is philosophical, says Mrs Schauer. There are no more knights and pirates, so their combat is a “resolved story”. Modern war is “really horror”. "
Posted by Unknown at 1:15 pm No comments: