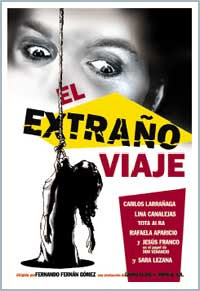 A real classic directed by Fernando Fernan Gomez, El extrano viaje centres on the going-ons of a family of 3 grown siblings in a small village. Ignacia, the eldest of three, dominates the lives of her slightly dumb sister and brother Paquita and Venancio.

This is a very funny movie, especially if you like your humour very black, and, visually, it sometimes parodies Psycho, to great effect. The gags are matched by some quite scary moments, and a mystery that unfolds with more humour than you would imagine. The movie is also good at portraying the tension and oppresion of life in a small Castillan village, where people gossip a lot and life seems to have stopped for some (the sight of the village's women looking a younger girls dancing the twist is hilarious) In that respect, it reminded me of Clouzot's Le Corbeau. 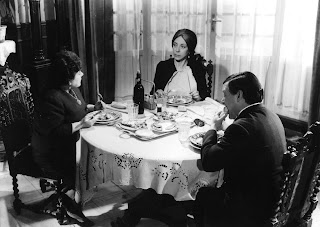 El extrano viaje was shown as part of the British Film Institute's Spain (un)censored season. Tonight was the last showing, but they will be showing many more movies over the next 3 weeks! Go! Go! Go!
Posted by Unknown at 11:57 pm No comments:

So we have to pay 30% more rent from next month, or leave, so I guess we will look for a new flat. How depressing! This one is so nice.

And now Andreas Scholl is ill, so no concert on Monday. I was looking forward it! Shitty week end so far, we can def. say.

Any form of uplifting music is therefore much welcome this week end. Like that song, for example.

Posted by Unknown at 6:25 pm No comments: