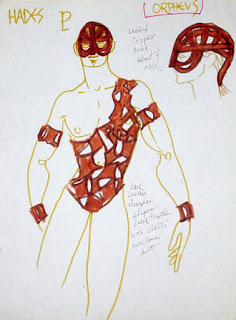 I recently read the book Stonewall by Martin Duberman, an account of gay life and activism up to the 1969 Stonewall riots, which sparked awareness for the gay liberation movement that had been developing well before then. It got me researching 1960s and 70s gay visuals: at the first Gay Pride march, in 1970, (it was then called the Christopher Street Liberation March and celebrated the first anniversary of the Stonewall riots), a banner read 'BETTER BLATANT THAN LATENT', which made me laugh and want to find out what else witty protesters had written or chanted.

I came across subdued magazine covers which included the art of Chuck Arnett, an artist famous for his murals in and adverts for gay leather bars in the San Francisco area. His iconic black and white mural for the bar The Tool Box, featuring masculine, tough-looking men, was pictured in a 1964 Life magazine article about 'Homosexuality in America', a watershed moment in American gay history. Also check out this ad for a bar called The Balcony.

Delving further, I found out that Arnett was originally a ballet dancer, who performed for National Ballet of Canada, and originally arrived in San Francisco after being a lead dancer in a touring production of the musical Bye Bye Birdie. Later on, his career in design would see him create costumes for San Francisco Ballet. Here is more info about his dance background, via the GLBT Historical Society. (I love how the Hades costume design above has a direct link to Arnett's more daring art and his depiction of men's wilder fantasies.)