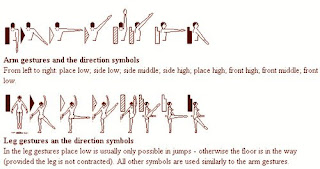 I have been loving dance for a long time, but I am still quite new to some technical language, like dance notation. What does it mean? Looking into it, I found this interesting article on Slate about how choreography is recorded.

(…) Before the advent of visual technologies like video and film, dance was almost impossible to record. Music has scores and plays have scripts, but dance has always defied attempts to create a written system of symbolic representation. Obviously, it is difficult to use two-dimensional figures to indicate movements through time and space (although two 20th-century notation systems, Labanotation and Benesh, have achieved modest success). But for the most part, the adoption of a written system has been constrained by the dance community's reliance on its oral tradition.

The history of Western classical dance begins with the founding of the first dancing academy by Louis XIV in 1661. From there, the fundamentals of ballet technique were built up over centuries and passed down through schools rather than by a literature of dance. Teachers trained students who, in turn, grew up to become dance teachers. Since ballet requires strict body control and clearly defined positions, these generations of teachers were able to develop a working vocabulary—for all those port de bras and pliés that still torment young students—that could be universally understood by practitioners. This language, codified by Jean-Georges Noverre in the 18th century, created a way to talk about the mechanics of dance, but the art of it was still recorded primarily in the memories of the performers and their audience.

It is the choreographer—part creator, part teacher—who represents the human link to the works and traditions of the past and it is he who shapes, through instruction, the dancers of the future. (…) Even today, despite the advent of video, a choreographer without disciples is in constant danger of having his work fade away after his death. Video can capture the external form and movement, and notation the positions, but the philosophy and technique of the great choreographers is impossible to get down. That is why so many of the giants of modern dance choreography—Isadora Duncan, Martha Graham, Merce Cunningham—founded their own companies. It also explains why fierce battles can break out among students about how best to carry on the master's legacy—the schisms resemble those that beset religious groups. The students may be disputing aspects of technique or interpretation, but what they're really arguing about is the memory of a dance performance they saw long ago.

More info on dance notation from the US Dance Notation Bureau website. You can also find an introduction to Labanotation here.

11/11/09 - Update: an article on how choreography is preserved in the New York Times, taking Merce Cunningham as an example. Really interesting.
Posted by Unknown at 12:46 pm No comments: