Went to see this show by this drag artist I have met once, Russella, who is really funny. Her show is called Princess Die: "Once upon a time there was a little girl who dreamed of being a ballerina... Russella as Princess Die chronicles the life and death of the Peoples Princess through a montage of lip-synching, song and dance. This is no fairy story"

I had a really good time. There's an hilarious moment where Sarah Ferguson interviews Princess Die. Sarah asks her silly questions "What was your favourite slope on that ski trip?" and Princess Die gives mad answers (while spitting pieces of cake out of her mouth) "I can give love to anyone" or stuff like that.

My favourite bit was the video of Princess Die trying to order a taxi on the phone and giving her name "Diana... Princess Diana... Lady Spencer... Ms Windsor... Queen of hearts... People's Princess... Bulimic... Victim... ha you know who I am now" hehehe There's also the video of the Queen coming to stab Diana in the shower, a la Psycho. Or the song Russella sings "I could do worse than that", brilliant lyrics.

Anyway, if you'd like to see more of Russella, or some other good drag shows, don't hesitate to go to the great place that is Bistrotheque, in East London. Russella and her group The Lipsinkers are doing a show there every Saturday in March.
Posted by Unknown at 1:43 pm 1 comment:

Ha, how I like YouTube... it makes posting so easy when I cant be bothered! I just need to find a video I want to share and hop!!

Posted by Unknown at 2:43 pm No comments:

Went to see my second, and last, show of the Flamenco Festival, which goes on until next Saturday. It was called "La puerta abierta", the open door, and starred dancer Isabel Bayon and catalan singer Miguel Poveda.

La puerta abierta opened at the Seville Bienal de Flamenco where it won the prize for Best show. For 1 hour and 15 minutes, Isabel Bayon stays on stage, getting changed between number in front of the audience, in a room at the back of the stage, with a door as the focal point. She starts moving to the sound of a recorded martinete (sung by a classic singer apparently) and the Goldberg Variations (think piano, think Bach) Daring, but it works. The singer Miguel Poveda and the band then come onstage, and we can hear a solea, a great milonga and some alegrias.

Poveda is a catalan singer, but you wouldnt know, I mean, he is just great and might as well be from Cadiz. Bayon dances lightly on her feet, I found her very refreshing and enchanting to look at, quite wonderful really.

A paso doble is then sung, and Poveda and Bayon start dancing together, holding each other, ballroom style. This great show then ends, too early really, with a great buleria. 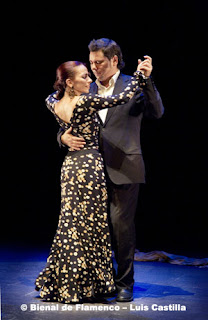 Posted by Unknown at 1:49 pm No comments: