Went to the free DeloitteIgnite festival at the Royal Opera House yesterday, and two pieces made me think how contemporary dance (and dance in general) could be made so much more popular: by people taking classes outside, in parks for example.

This idea had vaguely crossed my mind a few weeks ago when I saw this picture of a dance performance that took place on a basketball court on the (great) WNYC Culture blog. 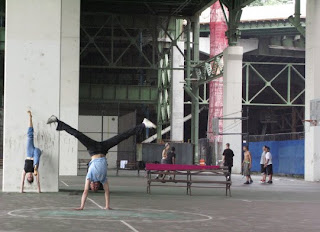 Dance Gang. Credit: Kennis Hawkins
In NY, there are guys playing basketball in courts in a lot of places, or people playing baseball in parks... it's part of the normal thing to see. Passers-by ignore them, or stop for a few minutes to watch them play, maybe some even join in. In London, every time you go to a park, there will be some people playing football or softball. It's just part of what people do in parks here.

But what about dancing? People often have a little stereo and play music from their ipod when they are having a picnic in the park. But why dont' they dance? I find it interesting that dancing is only allowed in certain social occasions, and that people feel self-conscious about dancing on their own or in a small group in a public space. At the DeloitteIgnite festival, Ben Wright rocked the house by teaching disco steps to 40 people on stage in the Lindbury Studio, but the Silent Disco, outside in the Covent Garden Piazza, attracted less numbers (could be lots of reasons: maybe it was the £5 deposit, the idea of dancing in such a public space, or the fact that you couldn't hear the music people were dancing to). 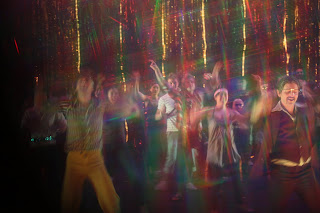 Ben Wright's This moment is your life, as seen through disco glasses
What if there were groups learning salsa in the park next time I went? Or contemporary dance? People would no doubt stop by, watch, maybe join in.

What if dance got out of the studio, the bar, the club, the enclosed space? It would be a great opportunity for people to run into an art form and a physical activity they might not be aware of, or might not have considered, and show them how unstuffy and fun it is. Actually, I think last week's DanceMob at Southbank Centre proves my point: they taught the dance routine outside their hall along the river Thames and must have attracted 300 to 500 people! Some came specially to learn it, but lots were passers-by who just ran into a group of people learning a dance and decided to join in. Same for the belly-dancing and tango lessons that were happening a few hundred meters away at the National Theatre.

It would be great if such things were more than just one-offs put on by big arts organisations, and if groups sprang up all around London on sunny Saturday afternoons, wouldn't it?
Posted by Unknown at 10:57 am 1 comment: