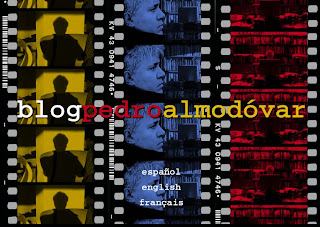 Pedro Almodovar has decided to start a kind of blog to talk about whatever is his mind, particularly his next movie, Broken Embraces. He should start shooting soon, but doesn't want to reveal too much.

"I promise to tell only the truth, but that doesn’t mean I’m going to tell you everything about me and about the film and its preparation. On the contrary, I intend to say as little as possible about the story and the characters, I’ll wander around on the fringes, in purely tangential elements. You’ll think I’ve got a real cheek, and I’m sure you’re right. (Anything to celebrate the lack of intermediaries). I’ve been nurturing a dream for some time. I’d like that at least once spectators would go to see one of my films without knowing what it’s about. I know that it’s an almost impossible dream, but I’m going to try to get as near to it as possible. Still, I am going to show lots of images of the different processes, images that will be transferred directly from my camera to this page."

It's in Spanish AND English AND French, so no reason not to read it.

Posted by Unknown at 9:55 am No comments: