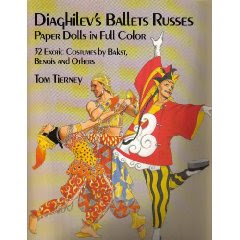 We're going to hear a lot about it - Diaghilev created his Ballets Russes 100 years ago.

The revered Financial Times dance critic Clement Crisp is the first to write about it a very interesting article.

"The shock of Parade, of The Rite of Spring, of Afternoon of a Faun, of Les Noces, even of Apollo, still reverberates in performance. In 1909, his very first balletic year, he had commissioned Ravel to compose Daphnis and Chloé. Stravinsky came to public attention by way of the Ballets Russes. Debussy, de Falla, Prokofiev, Poulenc, Satie, Richard Strauss, Florent Schmidt, Milhaud, Constant Lambert, Auric, were to write scores. Picasso, Matisse, Braque, Pruna, Gris, de Chirico, Tchelichev, Larionov, Derain, Goncharova, were among his designers. The mind reels: we have no comparisons today.

The Diaghilev exhibitions and performances this year are a necessary celebration of one of the greatest artistic forces in the 20th century. They are also a reproach to today’s ballet with its play-safe timidities (“Oh good! It’s Swan Lake”) and its tunnel-visioned directors. Can a new Diaghilev emerge and fight the good fight as that great man once did, to galvanise the art of ballet for this century?"
Posted by Unknown at 5:47 pm No comments:

Will let you know who wins!
Posted by Unknown at 10:00 am No comments: