Einstein on the Beach world premiere in Montpellier (France) 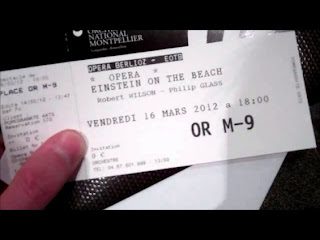 I was extremely fortunate to get to go to Montpellier in the south of France this Friday to attend the world premiere of the 2012 production of Robert Wilson and Philip Glass's iconic opera, Einstein on the Beach (I am working for the London venue that is presenting it in May). 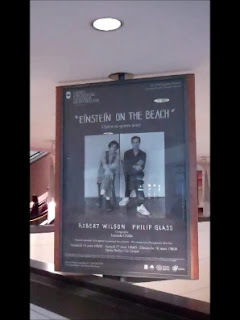 I won't go much into details and even try to review the show, but just wanted to write about the unique, fantastic experience that it was to simply be there and witness it.

Firstly, the work is so dense: I found it a lot more varied than its minimalism tag implies. The audience is allowed to exit and re-enter the auditorium as it pleases (the show lasts five hours without interval), and it seemed like many didn't feel the need to. I went out for five minutes around the three-hour mark - I really needed to eat something! (turned out to be a Snickers, the bar didn't have anything very exciting to nibble on!)

Secondly, it was interesting to see when people felt like it was a good time to leave - a lot of them read a particular moment (about one hour and half in) as a cue to go for a cigarette / drink, en masse. I was a bit baffled but it didn't occur again.


Finally, as I respond a lot to the physicality of performances, I couldn't help but notice the enormous physical demands Einstein on the Beach puts on its performers (dancers, singers, actors). The choreography by Lucinda Childs in the Field Dances sections doesn't have any breaks, it's continuous movements: jumps, circles, skips, dancers running on and off stage. I could feel their pain by the end of the second one. The leading actresses (Helga Davis and Kate Moran) are also on stage for an enormous amount of time, often moving in slow motion or holding difficult positions for long periods - the chorus do the same, and some of the singing itself (the simple mouthing of the lyrics) must require lots of practice (try saying 'one two three one two three one two three...' really fast, singing, and counting to know when the key changes come in!) The set doesn't help the performers either: I certainly wouldn't last 10 minutes on the wiry, spartan bench four dancers had to sit on during the Trial scenes, and even less if I had to hold a book in front of my face and move my face continuously from left and to right while doing it.

As a spectator though, I can't wait to see it again.