Contemporary dance has problems with old works: choreographers always present new pieces, and quite often older, great works becomes the stuff of legend that us newbie to the artform can never enjoy live. So I thought it would be good to start a series of fact sheets about some contemporary dance classics, a bit like the brilliant cheat sheets the Ballet Bag does, or the Guardian's Step by Step guides to dance.

Anne Teresa de Keersmaeker's Fase is one of my favourite pieces of contemporary dance. I have the DVD and saw it as part of a retrospective of her early works at Sadler's Wells in 2011. Since I am going to Paris in March to see it again (at the Centre Pompidou), I decided to start the series with it.

Background
Anne Teresa de Keersmaeker is one of the most important European choreographer of the last 30 years. In 1980, following studies at choreographer Maurice Bejart's Mudra dance school in Brussels, she went to the Tisch School of the Arts in New York University, where she created her solo Violin Phase, set to minimalist composer Steve Reich's music of the same name. When she returned to Brussels, she created the full length piece Fase, Four Movements to the Music of Steve Reich, which was a sensation and has since become a contemporary dance classic.


Structure
Fase is divided in four parts (three duets and one solo), each set to a different minimalist piece by Steve Reich (as its full title indicates): Piano Phase, Come Out, Violin Phase and Clapping Music.

It is performed by two dancers, with one dancer performing all the four parts. The dancers wear simple dresses, white socks and trainers in Piano Phase and Violin Phase. The dresses are replaced with shirts and trousers in Come Out and Clapping Music. In Come Out, they wear black boots, and in Violin Phase, the dancer wears white mary janes. The entire performance lasts about an hour.

Piano Phase sees the dancers perform side by side towards the back of the stage before stepping towards the front and returning to the back Two spotlights cleverly create three shadows behind them. In Come Out, they perform sat on stools, the stage darkened but for two hanging lamps above the dancers' heads and some spotlights, while Violin Phase sees the dancer make her way round an imagined circle. In Clapping Music, one dancer stands behind the other, and both are framed by a rectangle of light projected on a screen behind them. They slowly make their way backwards and across the stage, before ending at the front, just below the same hanging lights that were used earlier.

The music
Anne Teresa de Keersmaeker knew Steve Reich's music before she headed to study in New York. She has said that she found his music 'invited me to dance'. Her choreography in Fase closely mirrors the minimalist compositions: both have a strong, rigorous structure, and see elements gradually shift and change. Despite the mathematical structure of the music, de Keersmaeker found that it was very open and didn't pin her to one interpretation.

Piano Phase (1967) is a piece for two pianos who perform a melody in unison. One piano keeps the same rhythm, but the second speeds up slightly, going completely off before lining up again with the first piano. Violin Phase (1967) follows the same principle, and Clapping Music (1972) is a development of that idea (see Wikipedia for full details on Clapping Music).

Come Out (1966) is a tape loop of the sentence 'to let the bruise's blood come out to show them' (said by a survivor of police brutality). Repeated and duplicated, the recordings go out of synch with one another, becoming an abstract rhythm (some would say noise!)

Steve Reich only saw Fase 17 years after its creation, but had a very positive reaction. From the New York Times: 'It was not until 1999, when a revival of “Fase” came to New York, that Steve Reich saw what Ms. De Keersmaeker had made to his music. “My jaw dropped,” he said. “Of all the choreography done to my music this was by far this best thing I’d seen. The way that she used the phasing principle, which is really very difficult; the brilliant use of lighting in ‘Piano Phase,’ so that their shadows are like alter egos; the way ‘Come Out’ picked up the implicit violence in the piece — it was all analogous to the music. On an emotional and psychological level I felt I’d learned something about my own work.”'

The choreography
Anne Teresa de Keersmaeker is famous for her minimalist movement and for her musicality. In Fase, the choreography closely mirrors the music. So, for example, at the start of the section Piano Phase, the two dancers turn, and turn, and turn, at the same speed, in unison. As the second piano speeds up to get out of synch with the other, a dancer does the same, until she mirrors the other, before slowly coming back to the same speed.

At a post-show Q&A at Sadler's Wells in 2011, Anne Teresa de Keersmaeker asked the audience to think about what a child would do when dancing. People shouted answers back: 'wave her arms!', 'jump about', 'turn!', 'move the hips' and 'take a step to the side!'. Well, she said, it's exactly what the choreography of Fase is about, and what dancing itself is about: stepping (Piano Phase), waving arms (Come Out),  turning (Violin Phase), jumping (Clapping).

It makes for naturalistic movement, but it is far from simple, as the choreography closely reflects the shifts in the music. The DVD of Fase includes scans of Anne Teresa de Keersmaeker's choreographic notebook as a special feature (see below), and they are full of series of letters (a, b, c... a/a/a b/b c d ) matched with numbers, directional arrows, sketches and directives: 'stop', 'change direction'. They reveal how mathematical, geometrical and precise the choreography is, and how crucial it was for it to match the music patterns. Anne Teresa de Keersmaeker described it as: 'you set up a logic at the beginning and that logic is rigorously followed'.

This rigour and minimalism may sound awfully dry, but, just like the music, the dancing slowly reveals itself to the eye: small changes become apparent, differences are more noticeable and you realise the depth of it. It also has this driving force that pushes it forward, and it completely blew me away the first time I saw it. I was in awe of the dancers: how can you turn and turn and turn almost non-stop for twenty minutes, not miss a beat, stop sharply and develop such a presence on stage? Wow. 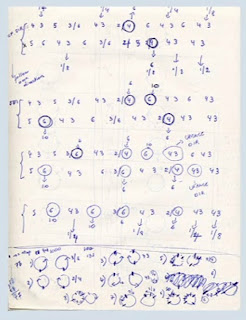 Some of Anne Teresa de Keersmaeker's notes and sketches for Fase

Some pieces have a particular feel. Come Out features sharp movements: arms are waved about, the body does 90 degree rotations, hands slap the thighs and the side of the waist repeatedly. Along with the hanging lights and the topic of the recording (police brutality), they give that section a certain institutional, more brutal atmosphere. Violin Phase is more playful: at one moment the dancer goes around the circle and goes down to touch specific points on the floor, as if playing a game. As she jumps and turns, she also flashes her white knickers!

They said
Deborah Jowitt, dance critic for The Village Voice, said of the first showing of Violin Phase in 1981: 'The audience sat dumbfounded, it was as if a new species of choreographer had appeared out of nowhere.'
'The perfect visual response to visual minimalism' Independent on Sunday
'A masterclass in composition and we follow it awestruck' The Guardian

Videos
The Violin Phase section of the piece has been performed on its own, danced on sand. Check out this video from a 2011 performance at the Museum on Modern Art in New York.
You can always do a search on youtube as well.
Get yourself the DVD!

Thank you for your essay, good information. I am using some bitd to my add them to my notes for my students in Spain. Amalia.